From the seaside resorts of the Costa del Sol, to the snow-dusted ski spots in the Pyrenees and the richly historical cities of Segovia and Granada, it's not hard to see why Spain is one of Europe's most visited countries. Whether you're a culture vulture, hedonistic party animal, adrenaline seeker or a chilled-out sun-soaker, the 17 regions found within the borders of this tremendous county have flavours to dazzle the palate of every man, woman and child on the planet!

Located in the dead-center of the country, Madrid, the capital city, is Spain's beating heart, home to the Royal Palace and the all-conquering Real Madrid Football Club.

Barcelona, Spain's second city and the capital of Catalunya is a sun-blessed haven that offers the perfect combination of history and hedonism, that is perhaps best known for a certain football team with a more-than-decorated history.

The baking planes of Andalucía rising up to the snowcapped Sierra Nevada is just one tiny example of Spain's diverse and juxtaposing landscape.

The north of the country is home to the industrial powerhouse of Bilbao, a surfer's paradise in San Sebastián and medieval beauty of Oviedo, to name just a few of the region's delights.

However spain is not only defined by its mainland, the Balearic and Canary Island archipelagos collectively play host to millions of tourists each year.

With over 470 million native speakers worldwide, the Spanish language is the second most important European language behind English, so why not come to learn it in the magnificent country of its birth? 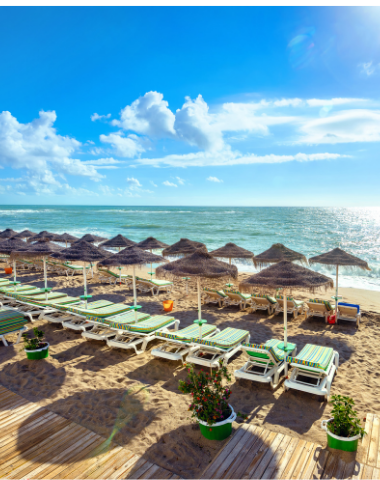