A real taste of German history

Located in the Swabia district of Bavaria, 65km northwest of Munich, Augsburg is the largest city on the Romantic Road, a 400km-long route that stretches from the vineyards of Würzburg to the bottom of the Alps.
Not one to live in the shadow of neighbouring Munich, Augsburg’s long history (spanning more than 200 years to date) is one of the richest in the region and, indeed the country - only Neuss and Trier are older. From the 13th century right up until 1806, when it joined the Kingdom of Bavaria, Augsburg flourished as an independent city state, becoming one of the wealthiest in the country, thanks to the textile trade and rich banking families such as the Fuggers and the Welsers, until its eventual decline in the 16th century, caused by religious unrest and economic downturn.
Modern day Augsburg is thriving once more, thanks to industry, technology and its modern university, which, founded in 1970, is now the academic home of over 19,000 students. The city's rich history, spired buildings and cobbled streets also make it hot tourists spot, aided by its placement on the Romantic Road and its close proximity to Munich, which is reachable in just 30 minutes by public transport.
So what are you waiting for? Soak-up the Bavarian culture in one of Germany's oldest cities whilst immersing yourself in the sophistication of the German language; choose Ausburg for your language stay! 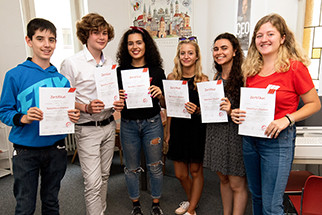