The centre of the French West-indies

Learn French in the Caribbean!

The capital City of Martinique, a French overseas territory, is also one of the principal cities of the Caribbean.

Having been economically downtrodden and structurally dilapidated for most of the 20th century, Martinique's capital has dramatically changed its own luck since the early 00s and is now a major tourist hub and one of the Caribbean's most popular cruise-ship destinations.

The city is characterised by the stunning Fort Saint Louis, a seaside fort, the first foundations of which were first built by the French in 1638. An enhanced urban life, renovated buildings and modern architecture have transformed the city into a tourist hotspot - although visitors still traditionally come to Martinique for the idyllic beaches, they almost always stop-off for one or two nights in the island's vibrant capital.

So if you're looking for colonial beauty that's just a stone's throw away from the Caribbean beaches you've always dreamed of, then Fort-de-France is the ideal location for your French language stay! 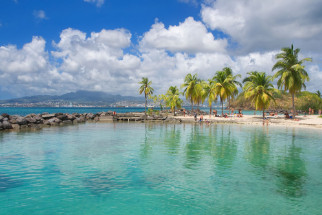